The geology is complex and the tenements cover a prospective chert-basalt contact within the OK Member stratigraphy within the Hodgkinson Formation. This contact hosts numerous copper occurrences which have been partially exploited by small time miners. Chert is present in the Chillagoe belt and on the Tartana leases with several explorers (including Tartana) interpreting the chert as an alteration feature.

The OK Member is a narrow, elongate, fault-bounded, chert dominated belt on the eastern margin of the Kitoba Member and is structurally intercalated with undivided Hodgkinson Formation to the northeast.

Copper-oxide enriched gossans are most commonly seen within OK Member rocks. In the cluster of VMS deposits around the OK Mine, VMS mineralisation consistently occurs at the transition from pillow basalt dominant zones to sediment/chert dominant horizons. A red/black jasper is also reported to be commonly spatially related to this “Mine Sequence” mineralisation.

There are over 1.8 km of gossan exposures hosted in the prospective OK Member stratigraphy within the Hodgkinson Formation and these cover 10 separate prospect areas with drill targets.

The maps below highlight the number of prospects and old mines along the boundary. Historical rock chip sampling has returned up to 27 g/t Au and 31% Cu and while these are likely to be supergene enriched, follow up exploration on most prospects has generally been sporadic and inconclusive.

A summary of some of the key prospects is outlined below.

Tartana notes that the bulk of the targeting work has been completed by the vendors. This puts the Company in a position to systematically explore the targets after prioritising in terms of size and prospectivity. Our strategy is that while a significant discovery supporting a standalone operation is possible, smaller orebody discoveries could provide valuable feed for the toll treating in the Mungana plant while oxide copper mineralisation near the surface could provide feed for our copper sulphate operations. 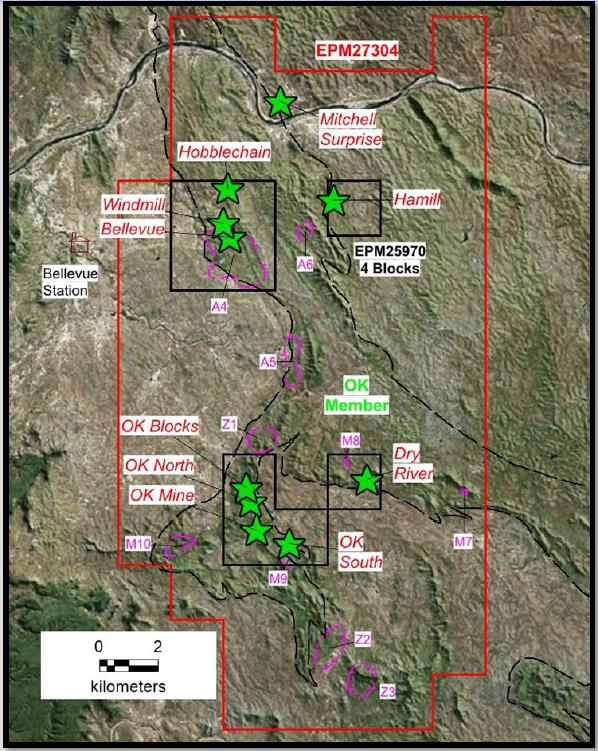 The prospects identified by the vendors are: